“How common is magic, really?”

It was a simple question, but it didn’t come with a simple answer. That answer always depended on both where you were asking it, and what you defined as magic.

Zern found out just how little magic mattered when her home was attacked and her brother murdered by an ancient sorceress who had the power of alien technology far beyond anything she could have imagined. In the chaos, the fear took over and she forgot all her training. She panicked, and she used powers she didn’t quite understand to do something she hadn’t thought through.

Now she found herself trying to help three confused scientists and their friend escape the same dangerous ages old grudge that she herself was caught in. The four heroes she sought to join the Five were willing, but not able, to fend off Ciel Aria and her sycophants.

Now their goal was simple: Stay low and prepare until the right time, and then strike with a fury no one expected.

But there were complications, including the evil that haunted her dreams and sapped her life, taunting and humiliating her by exhibiting his complete control over her unconscious mind.

The thrilling adventure beings here, and weaves through lands ruled by horrible despots, a religious rebellion against the crown, and an age-old conflict between forces beyond the worlds of men.

“How common is magic, really?”

The answer is forthcoming.

Buy The Five at Amazon! 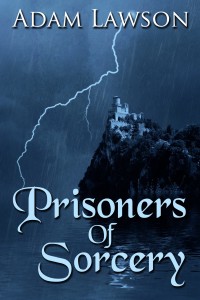 The trap snapped shut on them without warning.

After laying low and working toward a plan to get themselves out of the situation they found themselves in during the events of The Five, Aiden and his friends were scooped up by a vile sorcerer.

Split up and put into a maze-like dungeon, they have to fight their way to freedom… and then deal with the evil that is Ciel Aria.

Buy Prisoners of Sorcery at Amazon!

Temple of the Fallen

It all ends here.

In a dark, abandoned temple in a remote section of the world, it all comes down to one final confrontation.

A confrontation in the making since before those who will decide it were born.

They move from the technological sorceress of “Prisoners of Sorcery” to a civil war, a political chess game, and an ancient evil that will not rest until he is stopped — or killed.

The question is no longer, “How common is magic?”

It is instead: “who blinks first?”

Buy Temple of the Fallen at Amazon!

If I believed in animated gifs I'd put an under construction one here.